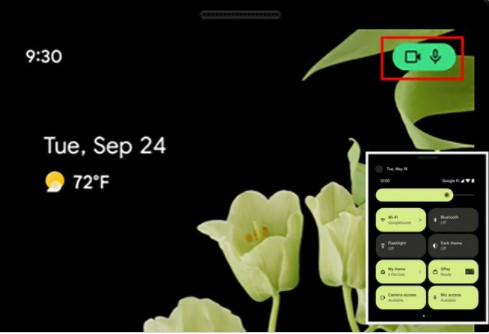 The ominous specter of Big Tech surveillance of private citizens grows more threatening by the day.

To stem potential encroachment, tech giant Google said users of its Android 12 mobile operating system can now be alerted if someone is watching them or listening in on them.

Google, which developed the Android system, said a new feature on its latest upgrade informs users when the camera or microphone on their phone has been activated, the New York Post reported last month.

“The Google feature was added to phones in the latest Android 12 update,” the outlet said. “The new indicator appears in the top right corner of the screen.

“You’ll see a camera or microphone icon when an app attempts to access either. It prevents apps from surreptitiously listening in — or even watching through your camera.”

While a photo-sharing app such as Instagram might have legitimate reasons to access your phone’s camera, if you notice that it’s being used by an unknown app, it could mean you’re being spied on.

“Cyber experts have uncovered countless apps that have inappropriate access to the camera on Android phones,” the Post reported.

ABOUT US
Community News Written by the Community, for the Community
Contact us: info@thetentacle.com
FOLLOW US
© Copyright © 2021 | The Tentacle
This site is hosted by Emmanuel Technology Consulting
MORE STORIES
Community