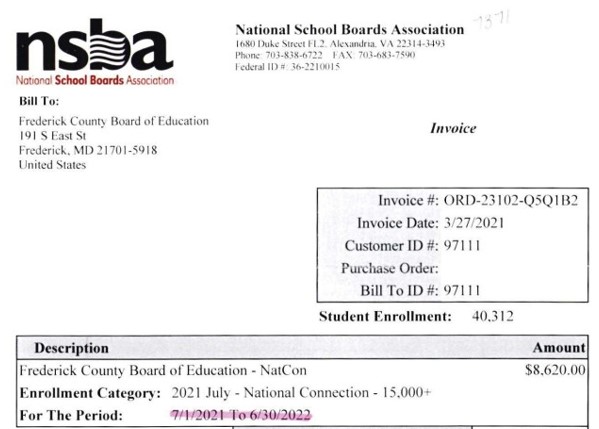 On July 14, 2021 Frederick County Public Schools (FCPS) paid $8,620 for its annual dues to the National School Board Association (NSBA).  The NSBA is responsible for educating Boards on things like Ethics and Codes of Conduct.

A little over two months later, on September 29, 2021 the NSBA was calling parents across the country “domestic terrorists.”  They were so concerned with the possibility of violence they sent a letter to the Biden administration asking for federal assistance.  They believed the growing push back from parents over Critical Race Theory ideologies and methodologies being used in their children’s classrooms warranted federal intervention.

In the letter they said they were concerned with “the growing number of threats of violence and acts of intimidation occurring across this nation.” The letter said “these heinous actions could be the equivalent to a form of domestic terrorism and hate crimes.”

The Biden administration forwarded the request to the Justice Department.  Attorney General Merrick Garland became involved when he began to threaten parents with investigations for protesting their local school boards.

The NSBA later apologized and said they “regret the letter.” Sadly, the damage has already been done.

Even before they sent their request calling for investigating parents exercising their Constitutional rights, FCPS Board of Education President Jay Mason accused this writer of using racist language for questioning FCPS for holding Racial Equity Committee meetings without the ability of parents to participate live or in person.  These meetings discuss among other things, Critical Race Theory, racial equity and white privilege.

After having witnessed FCPS teacher Jessica Fitzwater declare she was a “racist” with “white privilege” during a council meeting, I had every reason to want to attend meetings where race and equity were being discussed.

Most state Boards have acted swiftly, however, the Frederick County Board of Education has to date, remained silent on the issue.

Does our Board believe the parents of their students are “terrorists” who should be federally intimidated or investigated?  Does it believe parents should not have the right to attend or speak at public meetings in manners they find uncomfortable?

Mr. Mason is on record saying during a board meeting that we have to have “uncomfortable conversations.”  Maybe he was thinking only parents and the community should be the uncomfortable participants in the conversation?

Missouri, Ohio, Pennsylvania, New Hampshire, Tennessee, South Carolina, Kentucky and Montana have all announced they are pulling out of the NSBA.  FCPS doesn’t need to wait on the state of Maryland and the Maryland State Department of Education to revoke their membership.  FCPS has a membership of its own that we “terrorists” are paying for.

Does our Board of Education stand with the NSBA or does it stand with parents and Democracy?