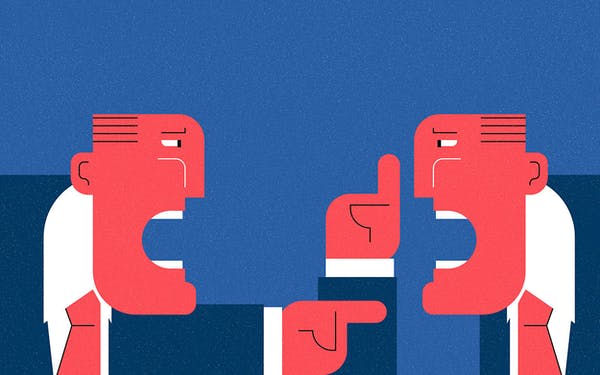 “Let’s start a new club. A club for true conservatives.”

“Oh my gosh, are they trying to form a new party and divide us further?!”

We’ve all heard some version of that, be it a club, or a new party to replace the Republican party. If you consider yourself a conservative and have not heard that, then you are not paying attention.

The Republican Party, as well as the clubs with conservative values, are fracturing.  When President Trump left office, many from of his own party were eager to see him go; while others viewed it as the beginning of the end – the first step in the fall of our great Nation.

Back in 2016 when he was running against Hillary, I didn’t think highly of Trump.  My opinions were based purely on things I heard in the background when the news was on somewhere, or what the morning DJ said on my drive to work.  I am not proud of this fact, but I refused to vote in the 2016 presidential election because at that time, I truly believed that whatever the outcome of that election was, the whole country would lose either way.  I didn’t view Trump as a competent leader of our country but detested Hillary.  I wasn’t a Never-Trumper, but also was not educated on current events, political events, or civics in general.  Like many, I knew what I was taught in high school and never really bothered learning more. At that time, I truly believed that my individual vote didn’t really matter.

Once Trump was elected, I started noticing a drastic improvement in the economy as well as him being more involved with relations with other countries and the list goes on.  It couldn’t be denied, he was truly making America great again.

When the 2020 election rolled around, it had become glaringly obvious to me, and MANY others, that the left was bending over backwards to smear Trump in the media, online, and everywhere else you looked.  I finally realized what “Fake News” really was. More than that, the country saw just how far the left was willing to go to prevent Trump from being re-elected.  They stooped lower than I ever would have imagined.

The media did their part pointing out just how insane the right sounds whenever one of us would bring up all the back-peddling and contradictions they (and others) made regarding Covid, BLM, ANTIFA, CRT and so on.

I knew, as well as most conservatives out there, that once the mail-in ballots were approved nationwide the left would find a way to use it to their advantage – regardless of whether it was legal. We all feared it, but still fought for Trump.  Many predicted, that was the end of Trump’s presidential run… for now anyways.

A lot of people, like myself, who did not vote for Trump in 2016 did in 2020. Some still did not agree with things he said or did, but still voted for him due to the insanity of the far- left. They were out of control and the whole country knew it.

The left did such a great job dividing the country and, in the process, brought a lot of pro and anti-Trumpers together despite their personal differences.  A divided party loses elections, but in the 2020 election most know and believe there was a lot of election fraud, despite mainstream media claiming otherwise. It was one of the most prevalent times in history that the Conservative Party came together, and voters showed up in record numbers. Sadly, there was so much fraud even as high as turnout was, it wasn’t enough.

It was then Republican and Conservatives groups, clubs and individuals divided. All struggle with messaging and spent too much energy fighting itself in efforts to convert those that were still persuadable. This struggle still continues.

While all of that is true, a party with intellectual diversity can refine and clarify old ideas.  Divisions between the party and clubs allow different messages to be brought to different populations, counties, states, and regions. Believe it or not, sometimes it is the internal arguments that can strengthen the ability to communicate.

Now, the Republican Party is weaker because of all the division between pro-Trump, who are the majority, and never-Trump who are the decided minority. What a lot of conservatives don’t seem to realize is that both sides consider the others to have abandoned “true conservatism.” As though there was one version to begin with.

There have always been differences in the conservative movement.  With Trump being president and the progressive Democrats stopping at nothing to divide the country arguments have become so personal it’s dividing families and lifelong relationships.  All because we have differences in our political beliefs or affiliations.

Remember, the “Never-Trumper” wing of the party encompassed moderates like Romney and hardcore Tea Partiers like Sen. Ben Sasse. The Pro-Trump wing had former Democratic moderates like Rep. Van Drew and unquestionable conservatives like Governor DeSantis.

If you think about it, in many ways “pro” and “anti” Trumpers are better understood as a style, rather than policy differences.

If everyone considered the majority of people you disagree with on the subject of conservative values and campaign candidates came to their opinions in good faith, regardless of where they got their facts, maybe a lot of the division between conservative would become more of a tool to educate rather than divide.

Convince others to understand your ideas; tell them why you think they’re wrong, but please remember we on the Right have a lot more in common than it feels like at times. At the same time try and remember Republicanism and Conservatism has never truly been a monolithic movement.

At some point the debates within the GOP and within the different clubs, will move beyond Trump, Covid, CRT and fake news. It must if we are going to survive and evolve as a party.

It’s okay to disagree with neighboring clubs – that is what politics are about – but there is NEVER a good reason for making personal grudges into a political debate. You should never bring drama between a few into a group to be shared among the many. Clubs and conservatives alike are allowed to back different candidates, that is the beauty of our country.

As a party, we will never suddenly come together in perfect unity. Instead, we will return to some version of our original arguments: establishment vs. grassroots, nationalist vs. libertarian, intervention vs. isolation. Conservativism can be difficult to define at time but again, it might be a style rather than ideology, but it too will be added to our countless internal disputes.

We’ve had these in-party debates for generations, not just in the last eight years, and we’re better for it.  In the founding days, the Republican party argued about how best to fight against slavery, and during the Cold War, it was Republicans who sought to strike the appropriate balance of forcefulness and restraint. The left however has always remained the party of BIG GOVERNMENT – Lots and lots of government intervention.

By remaining the party of argument, Republicans and Conservatives can remain the party of ideas.  So, when you run into another insufferable leftist, or you encounter an uber extreme right-winger, remember, we’re not a party that revolves around a single thought, person, or idea, but rather a complex set of ideologies.  We really do need opposing views to truly hammer out what ultimately matters most.  We need each other, we can’t win without each other, and we’re better off arguing with one another about those differences.  Whether we’re sitting around a picnic table or at a restaurant over wine and hors-d’oeuvres, some division is productive. It’s better than sitting around talking about how much we all agree with each other.