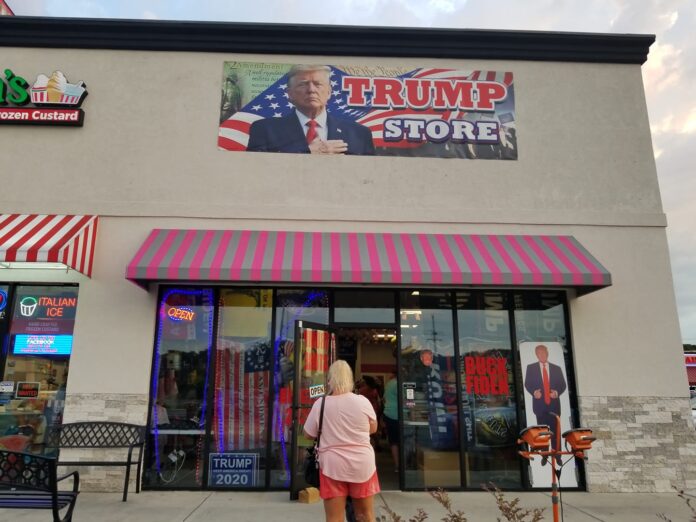 There’s nothing like a little vacation to give a person perspective.  My husband and I were forced to cancel our trip to South Carolina last year to celebrate our 20th Anniversary.  We were able to take it this year and spend a few days in Pigeon Forge, Tennessee.

You know what we found there?  Normalcy.  We discovered that when we removed ourselves from the constant pulling of political factions, we saw most of America wants exactly what we want.  They want to live their lives joyfully, in peace, free from cancel culture Woketarians, the lying media and politicians busy trying to convince us the world is hateful, racist and that we are all the victims of one group or another.

What people are really victimized by is big government, big media, big pharma and big tech.

We stayed at a lovely hotel in Pigeon Forge surrounded by people from every state and ethnicity in America.  Within walking distance of our hotel was a Trump Store.  You know what we didn’t find?  Outrage.

People walked past or went inside the store.  Some paid it no mind while others smiled and took pictures.  No one gathered to stone anyone else for daring to have a political opinion in support of Donald J. Trump.  No one was afraid to go inside.

All over Tennessee we were greeted with warm smiles and happiness.  If this store were placed in the middle of Frederick City, it would need around the clock police protection.  There would be nightly protests and calls for it to be SHUT DOWN!

That’s a reflection on us, on the voters.  We chose the people in charge.  Currently we have in every elected office from County Executive to Board of Education, people who have created and continue to create a climate of outrage.

The difference between Pigeon Forge and Frederick? They chose people who created the conditions where harmony flourishes.  Our current crop of elected representatives have created an atmosphere of mistrust where clans clash.

I don’t know the political parties of the people running Pigeon Forge, I don’t care.  Whoever they are, they’ve cultivated a “community.”  They’ve created an atmosphere where real tolerance; not bumper sticker tolerance, is alive and well.  Almost everywhere we went in Tennessee felt this way.  The same cannot be said for Frederick County and the state of Maryland.

I think most people here in Frederick County, regardless of political affiliation want to return to a place where we can laugh about our differences instead of being pushed into outrage.

We will never get to a place of peaceful coexistence if we keep electing public “servants” who do not serve people.  What we have in almost every political seat in Frederick are political “activists” who serve special interest groups and political agendas.

At this time next year political campaigns will be in full swing coming out of the primaries.  Hopefully, you voted for the person who will best serve your children’s futures, not a special interest or political party.

Every year we hear “this is the election of our lifetime.”  In 2022, that will actually be true.  We can continue down the path of societal destruction and ripping apart the things that make us countrymen, or we can reject the people and organizations trying to come between us. Let’s take this next election to vote for people who will restore the things that unified us.

In 2022 we can elect the servants who stand for solidarity or continue voting in those who seek to keep us separated.  Choose wisely.  Your choice will bring our children a future full of joy or a future full of outrage.