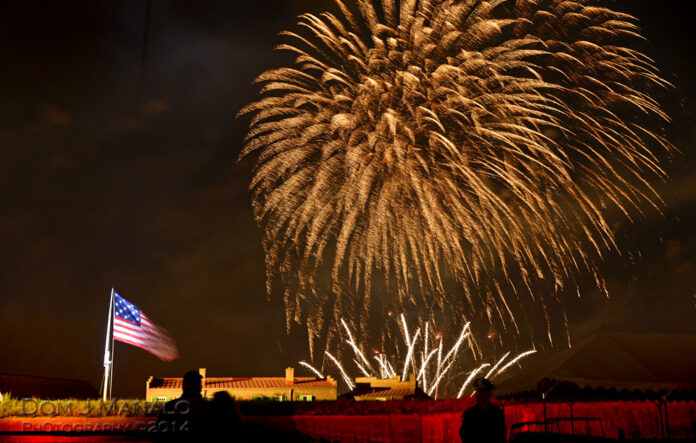 This column originally appeared in The Tentacle on July 3, 2012.

The Great Depression was the probable cause. As I was growing up, New Orleans’ 4th of Julys were not filled with festivities as compared to tomorrow’s happening in Frederick’s Baker Park. The cost of fireworks could pay for a meal, complete with high taxes, which we blamed on carpetbaggers.

The Deep South still mourned for the Civil War. Not far up the Mississippi River stood Vicksburg; it fell to the Union forces on the same day that Robert E. Lee ordered withdrawal from Gettysburg, on July 4, 1863. Until moving to Washington from the Airlift Berlin, I knew little about the battle in nearby Pennsylvania. Then there were those bitterly angry adults over the Reconstruction era. Louisiana textbooks kept alive hatred against Yankees and ex-slaves from the years after the war.

While a child, in the summers I was usually gone, visiting relatives upstate or in Arkansas. The July holidays I stayed home exist in memory as a reason adults drank: Prohibition was recently buried. To get me out of the house during the day one Fourth, Frank Vicari took me out in a rowboat, fishing in Lake Ponchartrain. The very next year I was hauled to a Dryades Street saloon, where people agreed to meet, before driving to Ocean Springs, right next to Biloxi, Mississippi.

Not ’til I reached Germany did I know anything about the “real” Independence Day, the date in the middle of World War II that the American Forces Network was born. We worked and lived in a castle in Hoechst, near Frankfurt. All the brass and very pretty girls were invited to a broadcast party on the chateau grass. I was assigned as the announcer in successive years.

Still in service, the United States Army Band provided fond recollections of three Fourths, especially concerts on the National Capitol steps; I was the band’s first assigned announcer. Above the stairs on North Market Street hangs a program for the night when I narrated “Peter and the Wolf.” After I was discharged at Fort Dix, before the Mall celebrations skyrocketed, Capt. Hugh Curry invited me back for a piece celebrating America; I was doing early television, on TV9. There were present 100,000 people, estimated by the Park Police

No less dear to my mind is the year my four children, tucked behind their mother, watched me light fireworks in Washington’s Chevy Chase; they now range in age between 52 and 60. The celebrations on the Mall expanded, so that they are visible all over the city, nearby Maryland and Virginia, too. Several hundred-thousand participate.

Sunday at church John Delaplaine asked if I intended to be in Baker Park Wednesday. I’ve been present in the past, once judging in the chili contest. But that’s before all dogs, including my Pushkin, were banished, which I fully understand.

We two are old and “gimpy.” We both have arthritis. We will sit home, watching the fireworks visible over the former Carmack-Jay’s – unless we climb the stairs to the bedroom and go to sleep.

Even in Frederick Trump is Transforming Political Parties