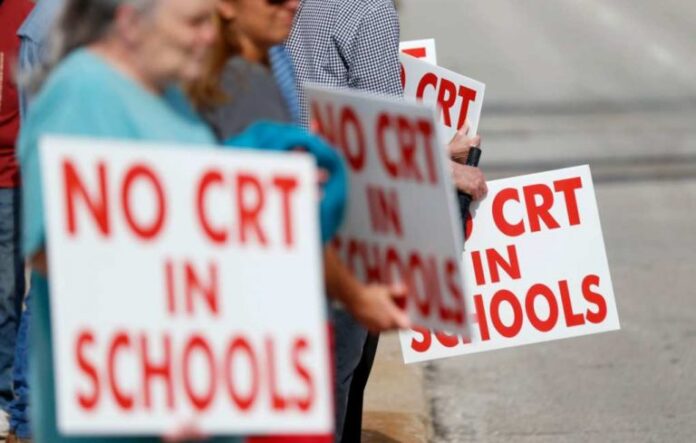 If you haven’t heard about Critical Race Theory (CRT) and how it’s permeating every segment of our culture, you must be living in your basement with your technology deactivated.

The Tentacle has written about it here and here. We’ve written how current Frederick County Public School teacher and sitting Councilman, Jessica Fitzwater demonstrated the results of it during a council meeting, here.

Now this potential County Executive wants to spread her Socialist, Marxist ideologies throughout the county.

Even though FCPS hadn’t yet held it’s Professional Development (PD) regarding Critical Race Theory, Ms. Fitzwater was already using it against the public.

The meeting where she proclaimed to be a racist with white privilege was in July 2020. The FCPS training didn’t happen until September 2020 and January 2021. One of the slides from the training deffined “racism”: “Racism is a complex system of beliefs and behaviors grounded in a presumed superiority of the white race.  These beliefs and behaviors are conscious and unconscious; personal and institutional; and result in the oppression of people of color and benefit the dominate group, whites.”

Another slide defined “white privilege”: “Refers to the unquestioned and unearned set of advantages, entitlements, benefits and choices bestowed on people solely because they are white.  Generally white people who experience such privilege do so without being conscious of it.”

Let me assure you, they are using what they learn on the people they interact with.  As an example, I asked Board President, Jay Mason to postpone a Race and Equity committee meeting so parents could sit in, he accused me of using “racist language”.

They were about to have their second meeting during a pandemic. Parents and the public would not be able to view the meeting live but could submit questions. I requested the meeting be postponed. The entirety of my email “I want to be on record stating my disapproval of this entire process.  Parents have a right to sit in the room where our children’s futures are being discussed.  We have a right to face you while you sit there and discuss how all white people are inherently racist and biased toward people of color.  We have  right to face you while you say all minorities are hopeless victims incapable of working their way out of poverty or bad choices.”

His reply was a page and a half long, the pertinent part came at the end: “Your comments are rife with racist language, and it is not appreciated. I would be happy to talk with you, so you can better understand the Black community. If not me, I know many people who will. We work better as one and get more accomplished as a team.”

Because of their Critical Race Theory and anti-racism conversations and training I’m already seen as a racist. If you are white, so are you. So are your children.

Make no mistake, Critical Race Theory is being taught and used in Frederick County Public Schools.  FCPS will use terms like “anti-racism”, “social justice”, “equity”, “diversity and inclusion” and “culturally responsive teaching” because “neo-Marxism” would be a harder sell.

This father is fed up with teaching his children, our children to be racists and is speaking out at his local Board of Education.

Before Critical Race Theory, FCPS was over sexualizing our curriculum and teaching our children subjects above their mental maturity, without their parent’s knowledge, or against their beliefs.

The book the woman in the below video is discussing is in two Frederick County schools.  It’s not a resource, but it is made available to them if they want to read it.

All of this was sanctioned and adopted by the current Board of Education. Board members Brad Young, Jay Mason, Elizabeth Barrett and Karen Yoho are more culpable than the three new comers David Bass, Sue Johnson and Jason Johnson. However the latter three haven’t come out against it.

As Superintendent of our schools Theresa Alban could speak out against it, but she isn’t, she’s facilitating it’s implementation.

It’s time for parents to take public education out of the hands of the “experts” who are Socialists and Marxists intent on destroying not just our economy and culture, but our children’s futures.

The good news is a group of parents and future parents are currently putting together a plan to take on the purveyors of Socialism, Marxism and their dangerous ideologies.  Stay tuned to The Tentacle for upcoming news.