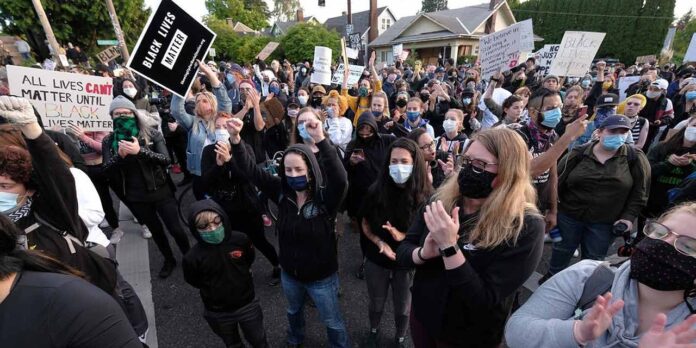 There are only a few places on earth where radicals and their children ritualistically burn the American flag and chant “Death to America”: Tehran, Baghdad, Beirut, Kabul, Ramallah—and Portland, Oregon.

The City of Portland, a cloud-covered metro on the south bank of the Columbia River, has become known for its political protesters. Anarchists, Communists, ecofascists, and various other agitators regularly denounce the police, politicians of both parties, and America itself, and flag-burning has become part of the protesters’ liturgy. Last summer, protesters associated with Antifa upped the ante with chants of “Death to America” and participated in months of violent protests to avenge the death of George Floyd while he was in police custody in Minneapolis. Children as young as four marched with the crowd to the federal courthouse, raising the Black Power fist and chanting “Fuck the Police!”

Famously the “whitest city in America,” Portland has become the unlikely headquarters of race radicalism in the United States. The city has elevated white guilt into a civic religion; its citizens have developed rituals, devotions, and self-criticisms to fight “systemic racism” and “white supremacy.” The culminating expression of this orthodoxy is violence: street militias, calling themselves “antiracists” and “antifascists,” smash windows and torch the property of anyone transgressing the new moral law.

We might be tempted to dismiss this as the work of a few harmless radicals “keeping Portland weird,” but in recent years, their underlying ideology on race has become institutionalized. The city government has adopted a series of Five-Year Plans for “equity and inclusion,” shopkeepers have posted political slogans in their windows as a form of protection, and local schools have designed a program of political education for their students that borders on propaganda.

I have spent months investigating the structure of political education in three Portland-area school districts: Tigard-Tualatin School District, Beaverton School District, and Portland Public Schools. I have cultivated sources within each district and obtained troves of internal documents related to the curriculum, training, and internal dynamics of these institutions. We can best understand the political education program in Portland schools by dividing it into three parts: theory, praxis (or practice), and power. The schools have self-consciously adopted the “pedagogy of the oppressed” as their theoretical orientation, activated it through a curriculum of critical race theory, and enforced it through the appointment of de facto political officers within individual schools, generally under the cover of “equity and social-justice” programming. In short, they have begun to replace education with activism.