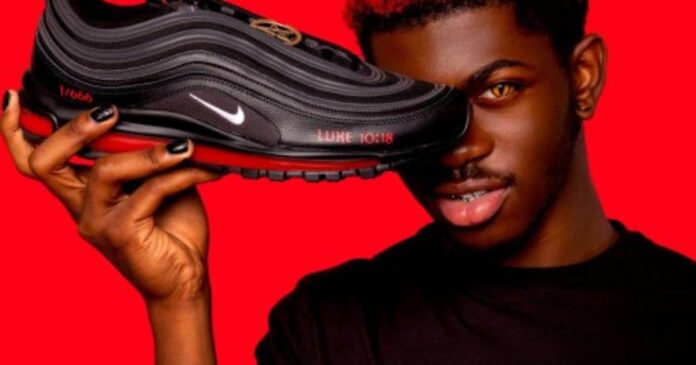 The other day we learned about the story of the customized Air Jordans, being promoted by Lil Nas X as “Satan Shoes.”

Well, it looks as if Satan is no longer in position to be attached to anyone’s feet.

Can I get an Amen for that?

Of course, we expected the courts to rule in Nike’s favor. Not that Nike deserves such favor. But that’s the beauty of well-written laws. They protect us all equally. They don’t pick and choose, as leftists like to do.

Now, we can all be spared the sneakers that boast a pentagram and human blood in the soles.

A federal judge ordered pop star Lil Nas X’s “Satan Shoes” to cease being sold, siding with Nike after it filed a lawsuit against the design company MSCHF Product Studio, which Nike says customized the Air Max 97 shoes without permission.

The “Old Town Road” singer caused chaos last week following the unveiling of his limited edition satanic-theme shoes, which are said to contain a drop of human blood. The initial unveil caused confusion and uproar from fans who thought the shoe was made in collaboration with Nike, which the company ultimately denied. Nike followed up with a lawsuit on Monday against MSCH Product Studio, contending it customized the Nike Air Max 97 without the company’s “approval or authorization” and adding that the move would ultimately cause “confusion and dilution.”

Nike’s lawyers said it submitted evidence “that even sophisticated sneakerheads were confused,” as well as evidence that boycotts are mounting against the company despite the fact that it has nothing to do with the design.

“There’s no bright line but the more famous the mark — and we think Nike’s swoosh is one of most famous mark of all time — the more protection it is afforded,” Nike attorney Kyle Schneider told the judge.

However, MSCHF’s lawyers contend there are “no statements that Nike is affiliated” with the satanic-theme shoe and argue that “no basis” for the recall exists, as nearly all of the shoes have been shipped.