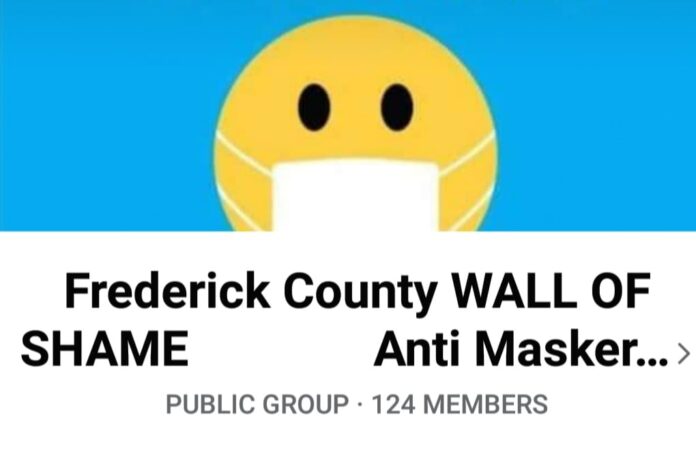 The Frederick County “Karens” have created a Facebook Page: Frederick County WALL of SHAME Anti Maskers Exposed.  These are the Karens of the Karens. You have to laugh because those of us who don’t wear masks aren’t really ashamed or hiding it.  You should be nervous though because these kinds of groups incite violence toward the innocent whose only crime is disagreeing with the use of face masks.

Mosey on over and take a look so you can be aware of who the intolerant people are.  They just might be your neighbors, and people to avoid.  You’ll see some familiar names. You might also want to make sure they aren’t sharing a picture of you without your permission. Especially when it could get you assaulted.

The person who created the page, “Inga Q. Watchmen” lists herself as a “warrior”.  Inga, no, you’re not a warrior.  YOU are a coward and a bully.  You created a fake name so you could create a Facebook page whose sole purpose is to shame people for having the gall to disagree with your position on mask wearing.  That’s not the act of a “warrior”, that’s the act of someone who wants to hurt innocent people without being held accountable.  Your page is repugnant.

One of the members, Elizabeth B [name truncated for her privacy], lists herself as a “truth seeker” in her profile.  I suppose only “her” truth is valid?  Maybe Elizabeth is so busy searching for “beauty” she missed the CDC update that clarified only 6% of the 160,000+ reported deaths were from COVID.  The remaining deaths were persons who were already ill and whose deaths were attributed not to COVID but with it.

If liberals really believe they are on the moral high ground, why the need to create fake names?  “Warriors” don’t attack the innocent while hiding behind a wall of anonymity.

As of this writing the above referenced page has 124 members.  I requested to join but would be shocked if I’m approved.  You’ll recognize many of the members but don’t assume they are there to snitch on their neighbors.  Some may have joined out of curiosity.

County Executive Jan Gardner and others will bear some civil liability if someone ends up getting hurt. That means YOU, Inga.

Groups like this one, along with local elected representatives like Jan Gardner and Councilman Kai Hagen should be held accountable for their rhetoric and actions.

Their words and actions dehumanize those who disagree with them.   This past Saturday, in Portland Oregon a man was targeted and killed for the crime of being a Christian Trump supporter.  In the videos of his assassination someone is heard yelling “We’ve got a Trumper over here”, followed by the sound of gunshots.

Actions like those participating in this local shame group, could very well end up getting someone killed.

It’s one thing to call out elected representatives for unacceptable behavior.  They volunteer for the scrutiny.  However, moms, dads, grandma’s, and children should be left ALONE.

Let’s remember prior to the pandemic the Center for Disease Control, National Institute of Health and the World Health Organization all said wearing facemasks in a public setting were of no benefit.  Now that masks are being used to manipulate the public into compliance with destructive county/state lock downs, they’ve switched their positions.  It’s a tool.

Non-mask wearers aren’t trying to hurt anyone.  They simply don’t believe that mask wearing provides any benefit.  There is plenty of science to back them up.

I thought the goal was restoring unity and restoring our sense of community. Groups like this are what drive wedges between us.

Links to the studies on the ineffectiveness of masks for public use, can be found in a previous column – Dehumanizing Your Neighbor Leads to Violence.

This Facebook group has been reported.  The only reason it was created was to shame and harass innocent people.  That’s unacceptable in a civilized society.  Don’t be a Karen.