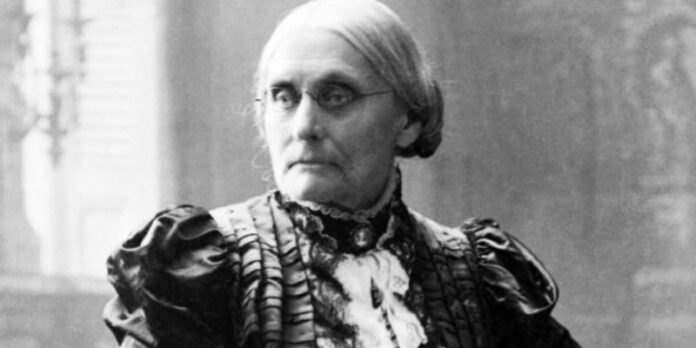 August 18 marks 100 years since the ratification of the 19th Amendment, giving women the right to vote. President Donald Trump, in a surprise move, pardoned the Women’s Suffrage movement’s Susan Brownell Anthony, to mark this century anniversary. Anthony’s crime? She dared to vote.

The Woman Behind the Suffrage Movement

Susan B. Anthony was born on February 15, 1820, in Adams, Massachusetts. She was raised as a Quaker, which instilled the belief that everyone, regardless of gender, was equal under God. At the age of 17, she attended a Quaker boarding school in Philadelphia but had to quit her studies after only one term when the economic Panic of 1837 hit and her family suffered severe financial hardship. The family sold everything they owned at an auction but luckily received assistance from an uncle who purchased the belongings and returned them to the family. Still, times were tough, so Anthony left home to teach at a Quaker boarding school, and the family moved to New York State.

Several years later, Anthony returned home and was introduced to two of her father’s friends: William Lloyd Garrison and Frederick Douglass. Speaking with them impassioned her to become involved in the abolitionist movement to fight for the freedom of slaves while also trying to fight against the oppression of women.

The first Women’s Rights Convention in the U.S. was held in 1848 at Seneca Falls, New York, and kickstarted the Women’s Suffrage movement. Ironically, Anthony did not attend the gathering even though her mother and sister did. Just a couple of years later, in 1851, Anthony met Elizabeth Cady Stanton and the two ladies formed a strong friendship that led to fighting for women’s rights for more than 50 years. Anthony had already been giving public speeches against the institution of slavery, and she soon started advocating for the right of women to vote.

While the First Amendment protects the right to assemble in public, it was still frowned upon for women to address such indelicate topics and Anthony routinely risked being arrested for expressing her not-so-popular views. “Trust me that as I ignore all law to help the slave,” she said, “so will I ignore it all to protect an enslaved woman.”

Congress passed the 14th and 15th Amendments, giving African American males the right to vote but not females – Stanton and Anthony were appalled that women had been left out, so the two formed the National Woman Suffrage Association.

Anthony, her sisters, and nearly 50 women in Rochester registered to vote in the 1872 presidential election. On November 18, the activist was arrested for illegally voting as were the other women who dared to defy convention. Anthony was not allowed to testify during her trial due to a law at the time that prevented criminal defendants from doing so. On the second day of the trial, however, the judge asked her if she had anything to say. She protested her treatment, saying it was:

“[A] high-handed outrage upon my citizen’s rights. You have trampled under foot every vital principle of our government. My natural rights, my civil rights, my political rights, my judicial rights, are all alike ignored.”

Anthony was not allowed a trial by jury but said she would have denied one anyway since women were not allowed to be jurors. Justice Ward Hunt ordered her to pay a $100 fine for her crime. “I shall never pay a dollar of your unjust penalty,” she said, and kept her word. Justice Hunt could have had her imprisoned, but if he had then she would have been able to take the case to the Supreme Court.

Anthony did not live long enough to see the ratification of the 19th Amendment, also known as the Susan B. Anthony Amendment. She died in 1906, 14 years before the change was approved, but her legacy lives on. In modern times, women flock to her gravesite to place “I voted” stickers in her honor.

National Correspondent at LibertyNation.com and LNGenZ.com. Kelli Ballard is an author, editor, and publisher. Her writing interests span many genres including a former crime/government reporter, fiction novelist, and playwright. Originally a Central California girl, Kelli now resides in the Seattle area.

What To Do About The Republican Party

You Say You Want a 3rd Party?