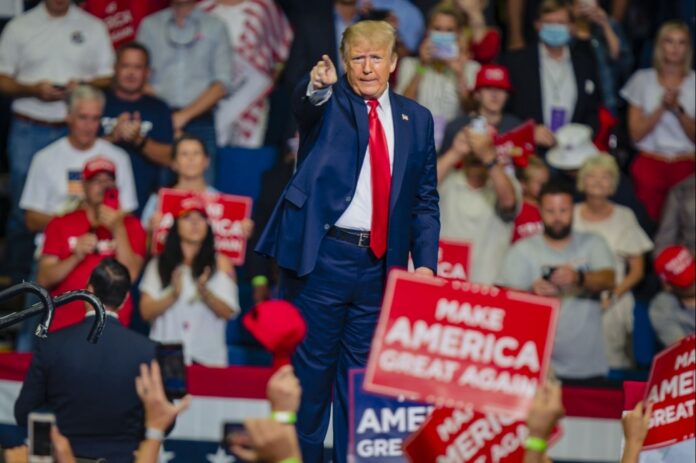 Last night was the first night of the Republican National Convention (RNC).  There was quite the contrast from the Democratic National Convention (DNC).  Visually it was amore appealing but what I noticed more than anything else: the RNC featured regular Americans like you and me, not the “entertainment” crowd.

The RNC seemed to focus on working Joe’s and Jills compared to the DNCs focus on the 1% among us.

The Democrats like to beat the faux drum of Trump hasn’t accomplished anything and isn’t fit for the job.  While Democrats were busy pushing fake collusion, Trump has been working every day despite the daily bludgeoning of the propaganda arm of the Democrat Party.

Producer, director Robby Starbuck, the son of a Cuban immigrant has made available to the public a list of Trump accomplishments.  The next time someone asks you what has Trump done, show them this list.  Then ask them what has Joe Biden done with his 47 years in the Swamp?

• 2019 Trump signed 3 bills for Native people. One gives compensation to the Spokane tribe for loss of their land in the 1900s, one reauthorizes funding for Native language programs and one gives federal recognition to the Little Shell Tribe of Chippewa Indians.

• Dec. 20, 2019 Trump finalized the creation of Space Force as our 6th Military branch.

• Nov 25, 2019 Trump signed a law to make cruelty to animals a federal felony so that animal abusers face tougher consequences.

• Violent crime has fallen every year he’s been in office.

• Under Trump’s leadership, in 2018 the U.S. surpassed Russia & Saudi Arabia to become the world’s largest producer of crude oil.

• Trump signed a law ending the gag orders on Pharmacists that prevented them from sharing money saving information.

• Trump signed a bill to require airports to provide spaces for breastfeeding Moms.

• Trump signed the Save our Seas Act which funds $10 million per year to clean tons of plastic & garbage from the ocean.

•Trump signed an executive order this year that forces all healthcare providers to disclose the cost of their services so that Americans can comparison shop and know how much less providers charge insurance companies.

•Trump signed the Right To Try bill May 30, 2018 that allows all terminally ill patients to try experimental treatments that are not yet approved by the FDA so that they have a fighting chance to live.

• President Trump is ending surprise billing.  Hospitals will now be required to post their standard charges for services, which include gross charges, the negotiated rates with insurers and the discounted price a hospital is willing to accept from a patient.

• Created a White House VA Hotline to help veterans and principally staffed it with veterans and direct family members of veterans.

• VA employees are being held accountable for poor performance, with more than 4,000 VA employees removed, demoted, and suspended so far.

• He signed bills in 2019 and 2020 allowing some drug imports from Canada so that prescription prices would go down.

•Trump administration will provide HIV prevention drug for free to 200,000 uninsured patients per year for 11 years.

•Trump signed into a law up to 12 weeks of paid parental leave for millions of federal workers, the single most expansive parental leave policy of ever in the US.

•Trump signed an EO allowing small businesses to group together to buy insurance so they get it at a better price.

• Over 90% benefitting from retroactive sentencing reductions in the First Step Act are Black Americans.

• The First Step Act provides rehabilitative programs to inmates, helping them successfully rejoin society and not return to crime.

• Trump increased funding for Historically Black Colleges and Universities (HBCUs) by more than 14%.

• Made HBCUs a priority by creating the position of executive director of the White House Initiative on HBCUs.

• Promoted Ric Grenell in Feb 2020 to Director of National Intelligence, making Ric the first EVER gay cabinet member for a President.

• President Trump and Ric Grenell led a global initiative to decriminalize homosexuality across the globe.

• Trump imposed sanctions on the socialists in Venezuela who killed their citizens.

• President Trump has ordered a halt to all U.S. taxpayer money going to international organizations that fund or perform abortions.

• Made a deal with the European Union to increase U.S. energy exports to Europe.

• Withdrew the U.S. from the job killing TPP deal.

• Issued an executive order requiring the Secretaries of Defense, Homeland Security, and Veterans Affairs to submit a joint plan to provide veterans access to mental health treatment as they transition to civilian life.

• In 2018, Trump’s DOJ dismantled an organization that was the internet’s leading source of prostitution-related advertisements resulting in sex trafficking.

• Trump’s HHS provided funding to support the National Human Trafficking Hotline to identify perpetrators and give victims the help they need.

• That hotline identified 16,862 potential human trafficking cases and provided 14,419 referrals to services between October 2017 and March 2019.

• The poverty rate fell to a 17-year low of 11.8% under the Trump administration as a result of a jobs-rich environment.

• Poverty rates for African-Americans and Hispanic-Americans have reached their lowest levels since the U.S. began collecting such data.

• More Americans are now employed than ever recorded before in our history.

• More than 400,000 manufacturing jobs created since his election.

This list was provided by Robby Starbuck at  GrowUpLive.com.