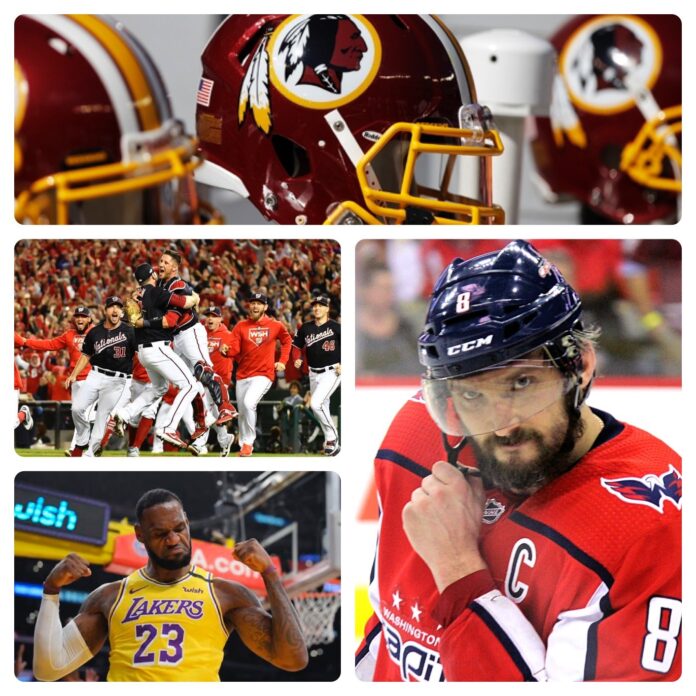 A lot has happened in the sports world in the past week.  As of July 13th Dan Snyder has officially retired the Redskins logo and nickname.  The new ones are “to be determined.”

NBA players have arrived in the Bubble in Orlando, Florida. Major League Baseball has started their training camps in their respective cities.  The National Hockey League has announced their timetable for the season to resume.

The Redskins name change comes on the heels of lost sponsorships, minority owners selling their shares of the team, and people protesting the name and logo. 2020 has been nothing short of a crazy year, but in all honesty can any of us say we expected the Redskins to actually change their name? While a new name and logo haven’t been announced, there is no doubt now, a new era of D.C football is about to begin.

NBA players have started to arrive in their bubble in Orlando, Florida. Players brought with them all the essentials: gaming consoles, weights, and lots of shoes. The biggest thing coming out of the NBA bubble was food prepared for players. The best description I can give of the food is it looks like Lunchables for adults.

The NBA is set to resume July 30th and many fans, myself included, can’t wait.

Major League Baseball teams have begun training for their 60 game season that begins on July 23rd.  The season opener will be the Nationals facing off against the Yankees.

While many local fans didn’t expect a lot from the Orioles this season, and were more focused on the Nationals defending their title, the 60 game season makes it interesting. By no means am I guaranteeing the Orioles make the playoffs but with 60 games anything can happen.  With such a short season, one good winning streak could put your team in great playoff position while a losing streak could eliminate all postseason aspirations.

While my prediction still stands for a Braves versus Yankees World Series, this MLB season will be nothing short of interesting and drama filled.

National Hockey League has announced their plans for the upcoming season when it resumes on August 1st. The NHL will have two bubbles one in Edmonton, Canada for the Western Conference teams and one in Toronto Canada for the Eastern Conference. 24 teams will be part of the Stanley cup playoffs including the Washington Capitals.

While I am a big advocate for player safety I’m glad they gave the players an opportunity to opt-out of playing this season if they felt uncomfortable. As most Americans and people around the world I can say, I am happy sports are back and can’t wait to see what the second half of 2020 has in store.

Editor’s Note: As of July 14 the official website of the Redskins is still www.redskins.com. The NFL website still lists the Washington Redskins and Redskins merchandise is still for sale.

Return of Keys Baseball to Frederick in 2021