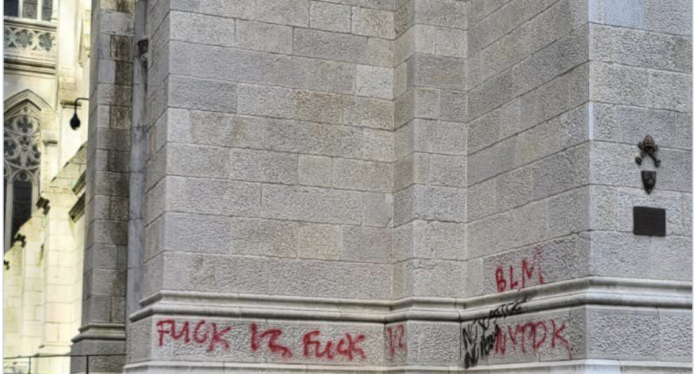 In the wake of the tragic death of George Floyd, fake moral preening left-wing agitators cry racism.  They have organized and highjacked peaceful protests resulting in destruction of private businesses and private property.   In New York they went as far as to deface St Patrick’s Cathedral, destroy storefronts, set fires and force curfews under the guise of First Amendment rights.

Through disordered archaic reasoning, the left has convicted the cop, along with every white American as inherently racist vs. inherently good, on the basis of skin color vs. the content of their character.  As the character-lacking narcissists they are, they feel they have the right to violently express their own feelings regardless of how it affects anyone else, due process, and the common good.  They are dictators; they are criminals.

When will Americans wake up?

Perhaps Americans should assemble to preserve our legal rights to due process, a fair trial, and innocence before proven guilty.  The media has lulled many good Americans away from this verifiable truth and the law, which gives no tangential onlooker the right to convict and sentence anyone. The media has lulled many into forgetting the reason for our right to justice.

After all, if the focus shifted to the legal process and our rights, the cries of racism, and all other discussion become moot points.  No other discussion is valid until facts come to light, the intention of the defendant is proven, and a conviction or acquittal can be made.

I am not saying that Americans should become blind.  We should be civically engaged and demand justice.   With that said, lady justice is blind, and for that we should protest and rally and demand she remains that way!

I am not proposing that Americans become silent.  Such cases should be discussed with family and friends.  It is a tragedy when any loved one dies; George Floyd has loved ones.  Americans should talk with kids about the responsibilities that not only come with liberty, but the responsibilities of being American, as well as a member of the police department or any other profession.   The discussion should include the responsibility to uphold justice, which includes restraint in convicting and sentencing someone outside of a court of law.

Lastly, I am not suggesting that Americans refrain from peaceful protest with a robust voice in the public square.   For the sake of that which is true, right and good, I support diligence and protests against the constant insidious attacks on American liberty, culture and justice.  I propose strategies and reasoning to defeat the left agenda.

It is time to stop the nonsense of the left, the rhetoric of the media, and the visceral response evoked by neuro-politics of social justice warriors up to no good.  There is a rise of narcissism and resultant bigotry among the left.  Conservatives are being led by the nose distracted by the left’s smoke and mirroring of arbitrary assertions that we are all racists. Such claims are arbitrarily asserted; and therefore arbitrarily denied!  All lives matter.

Frederick Is Not A Bastion of White Supremacy