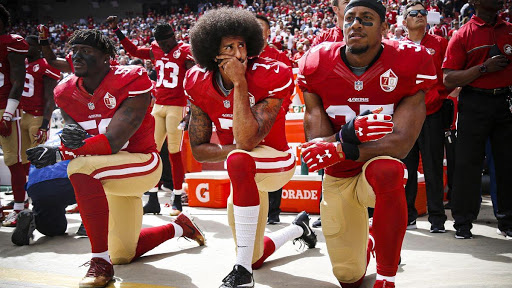 When the NFL interviewed Colin Kaepernick, he clearly stated he would not stand for the American flag because he thinks it is a symbol of oppression of African Americans.  Kaepernick took advantage of the public stage of the football field to express his own personal view of the world around him without giving others the same opportunity to rebut and reach the same audience.

There are two kinds of people in this world: decent and indecent.    Barak Obama made the same indecent claim that America is riddled with institutional racism, even though 90% of the electorate who voted for him were white Americans…..even though he could not name one institution in America that stands for racism.

Police brutality?  I call foul! There is nothing that institutionalizes police brutality in its oath, training, academy or policies! NOTHING!  We have indecent cops but it is a rare few and some are decent men who make mistakes.  I am tired of the blanket statements of people who refuse to think before they shoot their mouths off or take a knee.

Kaepernick is indecent!  He expresses his own short-sighted opinions demanding that they are truth….this from the boy who was lifted out of poverty by the white parents that adopted him and became a millionaire in the country he claims oppresses people with his skin color! What?

Decent people do not convict people before they have had a fair trial, even when evidence seems clear.  Decent people don’t point the finger at an entire institution because of a few bad, misguided, or weak cops.  And as for Freddie Gray?  That cop was acquitted in a court of law! Why is he mentioned? Does the justice system no longer count against the opinion of an angry mob?

Decent people do not call for dismantling the entire police force and dissing the entire American existence…….and the ones that do are hypocrites……Kaepernick, Hollywood elites and elected officials are all successful people who  were able to reach their goals because of the American experience.  Some came to America from other countries to escape tyranny and oppression only to demand it here!

When personal opinions are given credibility in the public square it is dangerous.  These random thoughts are ridiculous; they are not facts.  If Kaepernick was the decent man he claims to be, he would have used his time to help orphaned kids and lift them out of poverty……but then how can he do that when he does not believe it is possible despite his own success?

Although I do respect the author’s personal opinion in his article, it reflects nothing more than a random observation supported by no facts.  I expect more from a journalist who has the eye of the reader and the opportunity to tell the truth.