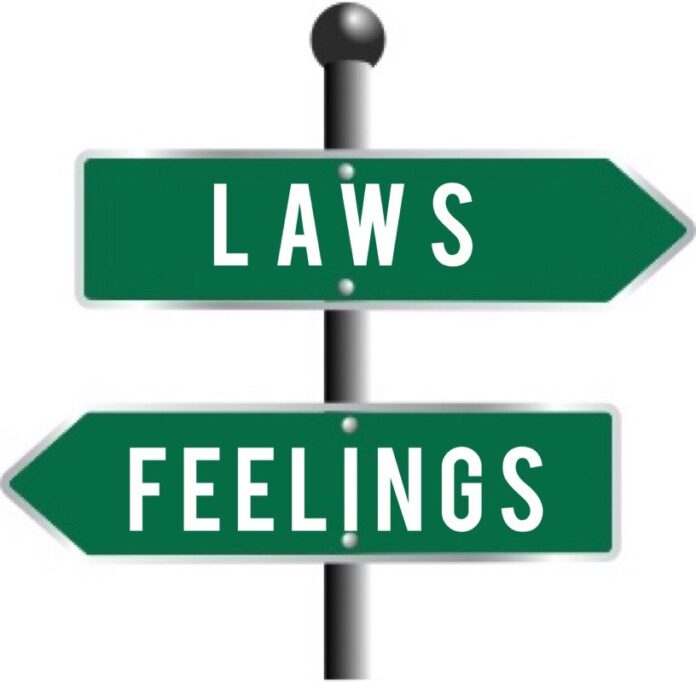 This nation is at the crossroads of Rule of Feelings and the Rule of Law.  Down which road are we going to send the school bus?

Education isn’t a failure in this country.  It’s an extraordinary success – if you’re a Liberal.  To change a society and culture you target the minds of young people.  Who better to target than children trapped in classrooms hour after hour hearing how unjust and racist America and American’s are.

Stop scratching your heads.  There is no mystery to solve.  Public education has been telling our children for decades males are toxic, whites are privileged, people of color are victims and women are oppressed.  They learn from elementary on our system is oppressive, dangerous and racist.  Capitalism doesn’t lift people out of poverty; oh no, it sucks the life force out of everything it touches.  Everything wrong in your house, neighborhood, state and the world is ALL America’s fault.  We just don’t “care” enough.  We are “systemically” evil, greedy and selfish.

They teach American government is bad but another form of government called socialism will fix everything (but they don’t name it – not yet).  Children and their parents suck it up like organic grape juice.   Learning is now about “feelings.”

THAT is what public education is teaching our children. Liberals have controlled education for decades now.  The fruits of their labor are now burning down our cities, blocking our streets, screaming in the faces of innocent police officers and defacing national treasures.

Instead of children being taught about an America that lifts people out of poverty and frees them from slavery, they have been taught that America oppresses and colonizes foreign countries so we can steal their nation’s resources.

In every class, in every way imaginable our children are being taught to hate America and its culture.  This red flag was raised locally nine years ago.  The public was informed Frederick County Public Schools was teaching education that is “multicultural” using the Social Studies Alive series.  Every book in that series was written to influence young minds how America isn’t all that great.  It teaches America is nothing without the contributions of other cultures.  It does its best to erase American pride and replace it with a global identity.  It doesn’t teach the need for assimilation and common bonds, it seeks to separate.

Children were taught for almost a decade before the red flag was raised. 20 years in, how’s that looking?

We no longer have the buffer of children being raised by parents and grandparents who were classically educated or didn’t attend public schools at all because they had to work for a living.  We used to have more parents countering the school narrative, who still understood why and how America was exceptional and worthy of admiration.  Each successive generation has been liberally educated and is now sending their children off to be taught to hate America.   Soon there will be no classically educated parents at home to counter the anti-America message.

FCPS, and the nation, have recently added “Social, Emotional Learning” (SEL) to compliment the “hate America” model.  They are going after our children’s mental and emotional wellbeing.

Now that the liberals have successfully convinced enough children America sucks, they have moved on to erasing the “rule of law” and replacing it with “rule of emotion.”   It’s all about how they “feel.”

Wanting to defund police departments isn’t a coincidence.  It goes with teaching young people life is only fair if they feel good.  Feelings-based living never reconciles how what feels good to Sally, doesn’t necessarily feel good to Joan.  (Pssst, it’s reconciled under “law.”)

Life based on feelings gets you riots and looting night after night with no one being held accountable.   It gets you vilified if you aren’t looking out for “their” health and welfare, while “they” bear no responsibility for looking out for themselves.  Disrespect of law and peace keepers is encouraged.

THAT is what public education is teaching our young people.  Disagree with them, and the mob will come for you.