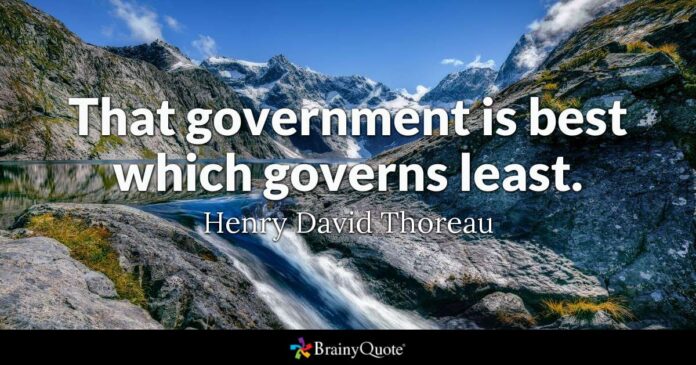 In his essay Civil Disobedience, Henry David Thoreau wrote; “government is best which governs not at all.”  Although sometimes criticized as an anarchist, Thoreau was not.  He proposed better government whereby the governed embrace responsibility and legislators objectively make decisions of conscience rooted in ethical and moral truths because anything else is an act of narcissism.

Thoreau recognized governments worldwide were shown to be self-serving.  They had demonstrated how successfully people can be imposed upon, and how readily people will impose upon themselves for their own advantage.  Good government, Thoreau said, is measured by its eagerness in getting out of the way.

Laws have never made Americans more just!  Conscience and the good content of American character have done so!  Even well-intended legislators are perpetrators of injustice under the guise of things like equality and human rights, when the underlying motivators are political control and partisan hierarchy.

While Americans witness armies of peaceful pundits and deranged terrorists in the streets claiming to be justice warriors, how many of them have consistently helped anyone personally?  Recent protests are not the agents of constructive change. They are a futile waste of time and taxpayer dollars.

Thoreau makes the same comparison when speaking of abolitionist legislators who talked a good game before the Civil War, but did nothing as individuals except to wage war on their own people.   True civil disobedience is not the protest of arbitrary accusations like white-privilege, rather it is the objection of unjust laws or mandates.

These protests are not about change, they are rooted in sanctimony.  It begins with hate and ends with no personal action or individual responsibility.  They call for more laws and government action, yet for over 200 years government authority has been abused and perverted before the American people can govern through it!

Americans will be well-served when the State takes into consideration all citizens at the expense of no one, when legislators treat every individual as a neighbor, and when they stop meddling but fulfill their duties to all neighbors and fellow countrymen.   Moreover, if Americans want change we must prepare for it and contribute personally.  It must include a deep respect for all human life at all stages of development and acknowledgement of inherent unalienable rights.  Let’s revisit the past, to help guide the future and return to a higher level of civility and charity towards one another as well as our own selves.  Let’s refrain from the chronological arrogance dismissing as archaic those that have gone before us.  We are not smarter simply because we were born later.

As Thoreau said; “There will never be a free and enlightened State, until the State comes to recognize the individual as a higher and independent power from which all its own authority are derived and treats him accordingly.”   We must act accordingly.  We are Americans of character.