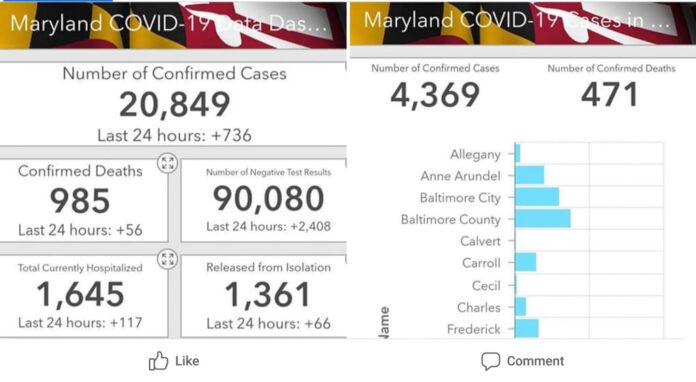 On March 5, 2020 Governor Larry Hogan (R), signed a “Proclamation” declaring a “State of Emergency and Existence of Catastrophic Health Emergency”.

He proclaimed that COVID-19 was a new, severe respiratory disease that caused illness or death and was spread person-to-person.  He said it was capable of causing “extensive loss of life or serious disability.”

The Proclamation further states other agencies such as the World Health Organization (WHO), Centers for Disease Control (CDC), and the US Department of Health and Human Services (HHS) have declared this new disease a public health emergency.

He had reason, at the time, to take this new virus as seriously as he did.

The Tentacle reported previously that by March 25 the rate at which new cases were happening in Maryland started to decline.  The “emergency” was over.

Everything after that proved this was not the “catastrophic” health emergency predicted.  Hospitals and medical infrastructure were not brought to their knees, nor were they flooded with COVID-19 patients.  The opposite happened.  Hospitals went empty, people were laid off.  People in need of non-COVID care were, and still are, being turned away.  Some unnecessarily, fear going to the emergency room for needed care.

By the end of March, early April, Hogan knew almost half the deaths were occurring in nursing homes.  On April 7, 2020 he announced nursing home “strike teams” would “… provide support to nursing home facilities. The teams will be composed of members of the National Guard, representatives of local and state health departments, and EMS clinicians, as well as doctors and nurses from local hospital systems.”

Why did Governor Hogan manipulate us into believing healthy, vibrant people in Maryland were dying when he knew the opposite to be true?  He convinced a trusting public that healthy people were dying and contracting a virus in such numbers it was imperative we lock ourselves away.  He then began stripping us of our God-given, constitutionally protected rights.

Today we learned we have all been had.  But for what purpose?

If you have been watching a variety of news media, you already had an inkling this virus attacked the weakest among us.  But we weren’t given proof – until now.

The website shows 47.81% of the deaths from COVID-19 have come, tragically, from our elderly and infirm.  In Frederick County, 95.55% of deaths are nursing home related.

On April 29, 2020 the website lists current state wide deaths at:

471 – Eldercare facility fatalities
514 – At large fatalities (some could be home-hospice).

Governor Hogan’s response is not proportional to what is currently happening in our state.

Why is the emergency continuing?  Why are people continuing to lose their jobs? 350,329 Marylanders have filed for unemployment from March 7 through April 3 with another 100,000 on hold still trying to get through.

Why isn’t any one in the mainstream media asking Governor Hogan, “what” exactly, is the emergency?

Hogan shut down our businesses; tore us from our families; prevented us from mourning our dead; celebrating marriages; and, rejoicing births.  He spread fear and panic knowing this virus was attacking mostly the weak.  He could have targeted that population.

Our General Assembly must put laws in place to clearly delineate what “emergency” means.  The powers to shut down a state must be clearly explained and narrowly defined.  This should never be allowed to happen in Maryland again. Losing 985 loved ones is tragic, but it is not an emergency.