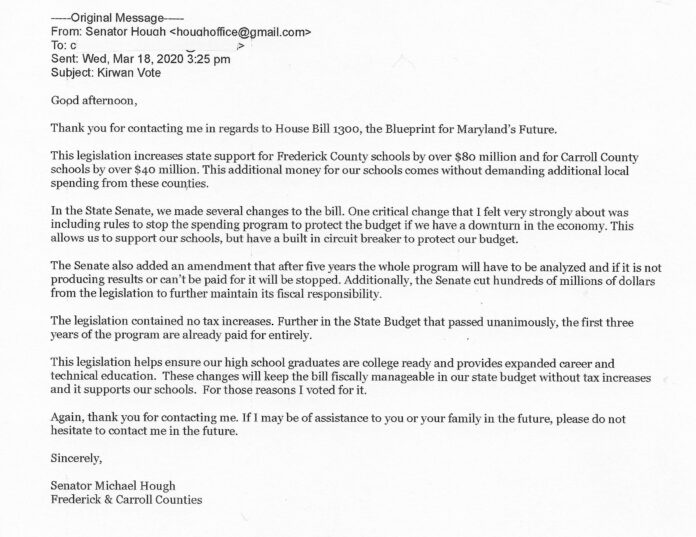 Senator Hough was asked why he voted for HB1300 (the Kirwan bill). His response is in the image provided.

One has to wonder with Frederick, the State of Maryland and the country as a whole, facing extremely uncertain financial times ahead, why would anyone vote to pass anything with a $30 billion price tag? (The 2020 Maryland State budget was around $40 billion.)

$30 billion for what? The money is for the same things it’s always for: curriculum, teacher pay, teacher pensions and the new universal pre-K. What are they going to do differently? How many decades are voters going to continue rewarding these kinds of legislators? Have they improved education in any measurable way in the past two decades?

Have they improved Maryland at all? Really improved it? I mean, have they done something your neighborhood couldn’t have done on it’s own if government weren’t itself standing in the way?

Is all of Maryland striving to be like Baltimore? That’s where the lions share of our money goes. Shouldn’t Baltimore be the safest, cleanest, best paved, most well educated geographical spot in Maryland? Seriously ask yourself why it isn’t? Mismanagement?

Which makes me ask the question, when it comes to education, when are we going to ask the teacher sitting in the classroom their opinion? Not a handful of them, not the teacher’s union and not the school administrators. When are we going to ask the boots on the ground, front line, taking up all the slack, Teachers? You know, the ones who actually know what’s happening “in” the classrooms.

Sadly, it looks like the Wuhan virus currently causing a national shut down, has settled in our county and state for the duration. There is talk of the 2019-20 academic year ending without students returning to their schools.

People have already begun losing their jobs. The virus has just started here. We are at the beginning of the damage it is going to do. If the virus “experts” are correct, Covid-19 will peak around April or May and may reemerge in the fall. The experts are unsure. If those experts are unsure, why is the Maryland General Assembly voting on expensive bills that will stress out what just might be a severely underfunded treasury? Where is the money going to come from? Senator Hough says the first three years are paid for. Really? If no revenue is coming into the state because the majority of our citizens are unemployed, where is this money coming from? Taxing people’s NetFlix and Amazon purchases isn’t helpful even under normal circumstances. You can’t tax what people are no longer buying.

A bill like this should have never been allowed on the floor while the public was prohibited from attending due to the Governor’s prohibition on public gatherings. Is anyone addressing this?

We’ve been here before with experts declaring they knew how to fix public education. In 2002 it was called the Thornton Commission. The findings of that commission had 18 years. Did we learn anything from that about throwing money at “experts”? I thought we learned not to throw good money after bad?

The “experts” know the watchers of the Thornton Commission have moved on so there aren’t many left to beat the drum of “no successfully measured outcome” or “wasted money”. That’s why these things tend to happen in education about every 10-15 years. Parents and the public have generally aged out of watching. The money hungry bureaucrats and their gaggle of “experts” feel safe trying the next big thing that will fill the public trough with more money for them to binge on. The few watchers left won’t be enough to cause a stir and the Teachers Unions will beat them down. They’ve perfected it. The tax payer never wins because he wasn’t around when it happened the last time. The cycle is predictable and ugly to those left watching.

Kirwan doesn’t address the poor curriculum, the forced national standards, the political bias and the constant meaningless drone of “college and career readiness.” It does, however, provide a pot full of money for the bureaucrats to play with.

It sure would be nice if elections really did have consequences, but this is Maryland after all. Looking like Baltimore City is all our futures.

“We Are One Human Race”