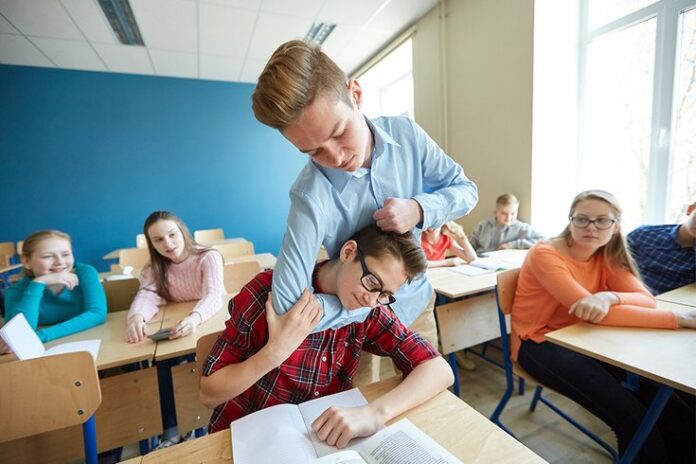 Their child was beaten pretty badly.  She was pulled by her hair down off some steps, punched and kicked in the head several times.  Resulting in a concussion.

Her parents report this was an ongoing problem the school was aware of. According to the parent, the bullying has been going on for over a year, with the schools knowledge. The school told this parent that they “couldn’t control the student”.  As evidence, when their child was assaulted, the student was with a monitor. The school knows this student is a danger to others and admits it has no control over the situation. This is unacceptable and in this writer’s opinion, the school should be sued.

When a school knows they have a dangerous student like the one mentioned above, rather than turn a blind eye and just hope things work out, why not suspend them?  Why do we have Heather Ridge?  If the student in question could benefit from a setting like that they should be there or expelled.

I don’t think it’s fair to students who want to be in school and better themselves to have to suffer because of students that don’t want to be, and shouldn’t, be there.  Let’s stop worrying about days of schools missed because a student gets suspended, and start focusing on valuable instruction time that students lose because of those students.

Why are disruptive and violent students that obviously don’t want to be there treated with kid gloves while students that do care are expected to “suck it up and deal”. Apparently, Frederick County Public Schools cannot control their students and cannot guarantee their safety either. Can you understand why Frederick County has one of the highest number of home schooled students in the state?

Do you understand why some parents, students and teachers don’t feel comfortable in some of our area schools? Can you blame them? So while the Board of Education wastes its time on Racial Equality committees and Restorative Justice practices that do not work, a vast majority of students are having their education high jacked by a few students.  FCPS leadership either refuses to or just can’t deal with the current culture of violence in its schools.

It’s time we have people in the leadership positions stand up for the students that are being bullied and harassed, not bending over backwards for the ones doing the bullying and harassing. Start suspending these disruptive and violent students, stop letting students with ankle monitors in to schools. Isn’t that why FCPS has on-line learning, so people can stay home and still keep up with their classes, if they so choose to?

This is one of the many reasons I say, HOME-SCHOOL, if you can. It’s safer and studies show home-school children do better than their public school counter parts. If you can’t home-school, stop voting people onto the Board of Education that are race hustlers, social justice warriors or just worried about students that fall into certain categories. Start voting for people that want to help ALL students and will make sure they can get the best education possible. People that will not allow a few students to disrupt the learning process at school. Vote for people that have that increasingly rare thing called, common sense.