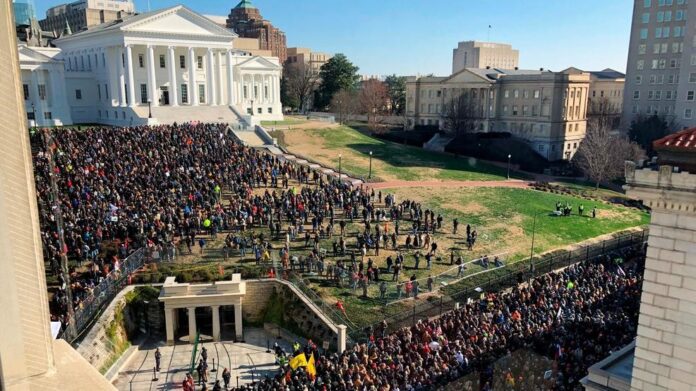 Unless you live in a cave and/or have no access to social media you should be aware that Monday, January 20, 2020 there is a 2nd Amendment Rally in the great state of Virginia.  The rally will be at the Pocahontas Building, 900 E. Main Street in Richmond and move to the capitol steps.

What started out as their normal, yearly lobbying day at the capitol in Virginia has turned into a multi-state rallying point for the preservation of 2nd Amendment rights across the nation.

After the mass shooting in Virginia Beach on May 31, 2019, Governor Ralph Northam (D) made the decision to go after Constitutionally protected gun rights.

In July 2019 Gov. Northam called a special session of the General Assembly to take up a package of gun-control bills.  Northam thought with the tragic killing of 12 innocent people just months prior, support was on his side.  The only thing standing in his way was Republican control of both houses.

Republican’s decided legislation should not be written under such emotionally charged conditions and adjourned the session with no action taking place.

Through what can only be called the worst political move of all time, the Virginia GOP let 25 seats in the General Assembly go unchallenged.

Democrats gaining control of the General Assembly left the citizens of the state in fear that legislators would introduced laws threatening their 2nd Amendment rights.  The fear was so great many Virginia localities declared themselves 2nd Amendment Sanctuaries.

Other mostly peaceful, gun rights advocates from across the country, realizing what’s going on in Virginia has the potential to rise up in their own back yard, have decided to travel to Virginia in a show of support. They want to help Virginian’s nip this in the bud.

The Frederick County connection to the happenings in Virginia is our very own Kevin Caldwell.  Mr. Caldwell, a veteran is a candidate running for Congressional District 6.  He has plans to attend, and he isn’t going alone.

When asked about why he feels compelled to travel to Virginia he said, “We are going to Virginia because it is true that an assault on our freedoms anywhere is an assault on our freedoms everywhere.  Today Virginia, tomorrow Maryland.”  He went on to say, “Since we are governed by a majority who participate we must participate. I hope to lead by example.  Leading form the front is something we severely lack in Congress. I am not just asking my fellow citizens to participate. I am first and then asking them to as well.”

Lisa Nieves, one of the Caldwell Campaign’s participants, said she was going to be at the rally, “I’m going to stop the assault on our constitution and I’m supporting the Kevin Caldwell Campaign and he believes in the second Amendment as well.”

Is anyone else beginning to see the groundswell of American’s, Virginian’s, Marylander’s and yes, Fredericktonian’s who have grown tired of being ruled by bureaucrats?  Have we finally reached the point where we are tired of getting bigger, repressive government while our personal freedoms are disappearing and encroached upon?