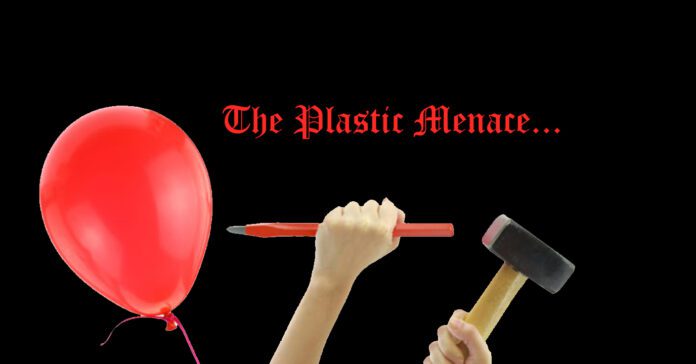 A crisis of catastrophic proportions was aptly diffused by the Frederick County Council in its final meeting of 2019. In a measure of sheer brilliance and masterful foresight, the ravenous scourge of a would-be plastic plague was averted. Truly, King Solomon himself would have sat in utter amazement as he skillfully watched the applied collective wisdom that was laid before the masses. The decision was truly a masterful example of government at its finest.

A Frederick County Council majority rose to the challenge as council members Jerry Donald, Jessica Fitzwater, Phil Dacey, and Steve McKay voted with Councilman Kai Hagen in a display of levelheadedness and strength reserved for only the direst of issues facing mankind. It was a bipartisan sight to see. A true spectacle of A administrative genius.

The collective will of the county body politic as declared by Kai Hagen himself was to take up the quarrel with the synthetic foe directly. The exceptionally rare yet environmentally cruel practice of citizens intentionally releasing both shiny plastic and drab latex plastic balloons was so pressing a matter that it created a serious crisis in the county.

The fluttering enemy at the gates has been swiftly thwarted by a bipartisan vote of unadulterated courage. Such a decision of clarion magnitude is seldom witnessed in local politics. A $250.00 fine was the only way to free the county from such an environmental oppression.

Truly the Frederick County scribes will undoubtedly undertake the noble task of painstakingly recording Councilman Hagen’s words which he delivered with a poised courage which magnificently displayed a solid statesmanlike example of true leadership. A perfect example of textbook eco activism masquerading as public service for the posterity of future generations.

Hagen’s own manifestation of divine providence shall be a beacon for our future county council eco warriors who might one day soon face the equally pressing crisis of epic urgency. The future is now seen when confronting a similar and equally as flexible enemy. The stage is set for the final battle against the cursed and reviled single use bag.

Local Republicans sat in astonishment as the social media scribes recounted Councilman Phil Dacey’s courageous stand. Dacey described on Facebook how he was inspired by Councilman Hagen to undertake such a herculean task.

“Eh, I viewed it as a low stakes anti-littering law.”

Such examples of concise decision making and simplistic yet elegant expressions in the face of adversity are sparse in the chronicles of Frederick County legend. As many of us further saw on social media, Councilman Dacey then solidified his name in the local history books when he further pressed his thoughts on his heroic account of achieving a permanent liberation from the plastic menace. He stated further that:

“This was just a small bill that sounds a bit funny, but at the end of the day it’s really just saying don’t litter by releasing balloons.”

As a true lover of history, I will be sure to never let my children forget about the quiet and damp night in December when five Frederick County Council members of action joined together met their cunning foe on the field of battle and vanquished their fluttering enemy. Our local families and homes forever safe because of the selfless sacrifices made by County Council members Jerry Donald, Jessica Fitzwater, Phil Dacey, and Steve McKay inspired by Councilman Kai Hagen who heard people rejoice if only in his mind.

I will certainly pass on to my grandchildren this legend as it truly happened… and mightily bored they’ll be.